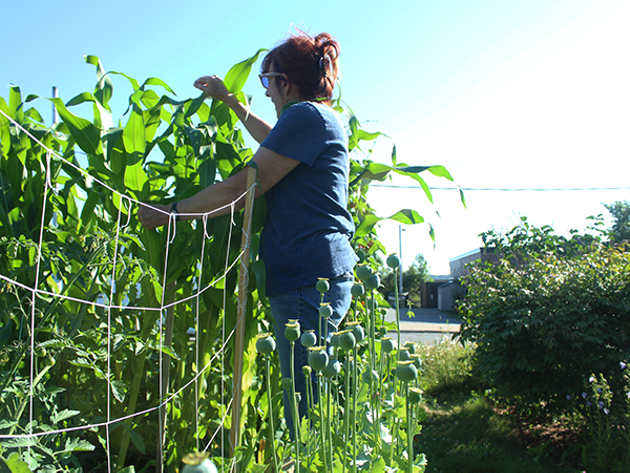 Making the most of the city’s limited green space

Written by Kaila Jefferd-Moore; Originally seen in The Coast

Urban agriculture is trending hard these days, and there are a handful of reasons why: Knowing where your food comes from, it looks cute, it builds community and food security.

There are over 25 community gardens or urban farms in HRM, but the municipality could be greener. There are under-used lots of land and green space that can be used as community gardens. In June 2018, regional council approved the Halifax Green Network Plan as part of the long-running Centre Plan; it includes amending municipal planning strategies and land use by-laws “to encourage small-scale agriculture on private properties.”

Most of the long-running community gardens, like the upstart garden at Veith House, are on private properties that allow for long-term planning. It’s hard to propose creating an urban agricultural haven on a patch of public land because of HRM’s three-year rule.

On municipally owned property, a community garden can be built for personal use, donation to local food causes, generating revenue, the production of a floral or landscape display and instructional programming. The land-use agreement for these only lasts three years with the option to renew, though isn’t guaranteed.

The lack of a guarantee hinders places like the Common Roots Urban Farm—which just left Robie Street—to plan far ahead, and their difficulty in finding somewhere to relocate shows another obstacle. “There’s not enough space for people who want to garden,” says Sarah Burgess, coordinator of the new Common Roots Bi-Hi Garden. “We’re hoping to be able to find more space and expand.”

Thirty-six community garden plots are moving to the new farm in Bi-Hi Park off Bayers Road and the exit ramp from the 102. It will host 800 feet of market garden beds, says Burgess. There will also be a handful of common beds, where perennial plants and food will grow and anyone can tend to it and pick from it.

Burgess says there was a want from the Common Roots gardeners to keep community beds and really build that aspect of the farm: “The market garden and communal beds are where as many people as possible can participate.” But in the meantime, they’re still waiting for the rain to clear to set up the new farm at the Bi-Hi Park location.

Another obstacle for gardens, besides rain, is finding safe soil. A lot of soil on the peninsula is contaminated with lead and zinc paints, industrial emissions and naturally occurring high levels of arsenic from the bedrock the city is built on.

“So it does mean that finding soils in the city to garden on is tricky,” says Jayme Melrose, business developer for Common Roots. “It usually means that you need to bring in some soil and build the soil up.”

This gets expensive once you include the materials needed for making raised beds, buying and transporting the soil, buying seeds or seedlings ahead of the growing season, getting a sustainable compost going. The upstart for a garden is pricy.

And grants can sometimes be difficult to obtain or they don’t come at the right time. A lot of deadlines are March 1–too late to plant seeds to grow your own seedlings–or in September, so wannabe green thumbs have to be thinking far ahead—but not more than three years.

Common Roots’ Bi-Hi opening has been delayed because of the rain, but they’re hoping for an early June set-up. “As soon as the dirt is moved, we’re open,” says Burgess.